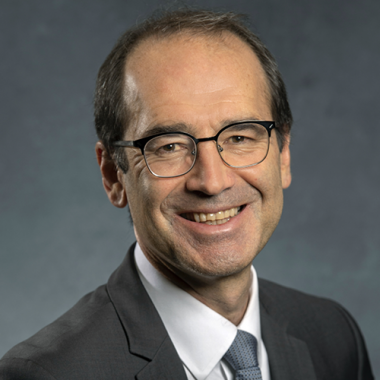 Alexis Vovk graduated from the ESSEC Business School. Since 1991, he has worked with Total Raffinage Marketing, and in Total’s Marketing & Services Division, holding various positions in seven countries in Europe and Africa.

He began his career as an Area Manager in the retail network of Total Oil Great Britain, moving to Paris in 1993 to oversee fuels pricing for the French distribution network. In 1996, he took the position of Corporate Planning & Information Systems Manager for Total Oil Turkiye, before moving to Total Tunisie as Sales & Marketing Manager from 1999 to 2002. He returned to the head office in 2002 as Project Manager for the Raffinage Marketing Strategy Division.

In 2005, he joined the Africa and Middle East Division as Deputy Vice President for East Africa operations. In 2007, he was appointed Managing Director of Total Zambia, then of Total Kenya in 2010, followed by Total Nigeria Plc in 2013. He returned to Paris in 2016 to become Senior Vice President, France, and President of Total Marketing France. In January 2019, he was appointed a member of the Total Marketing Services Management Committee. In January 2020, Alexis Vovk became President of Marketing & Services and a member of the Total Executive Committee.