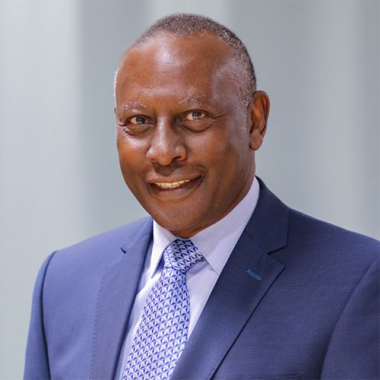 Eddy Njoroge is the former CEO of Kenya Electricity Generating Company (KenGen), where he spearheaded the transformation of the company from a parastatal to a publicly listed company with a greater commercial and sustainability orientation.

From 2008 to 2012, he was the President of the Union of Producers and Distributors of Electric Power in Africa, giving him a unique overview and perspective of Africa’s Power sector. He received a Lifetime Award from the Africa Energy Forum in recognition of his contribution to the transformation of the energy sector in Africa.

He currently serves as Chairman of Telkom Kenya, Britam General Insurance Ltd., and is the Immediate Past Chairman of the Nairobi Securities Exchange. He also sits on the board of Britam Life Insurance, Kenya Bureau of Standards, and Proctor & Allan among other companies. He is a member of the Investment Committee of the Africa Renewable Energy Fund (AREF), a renewable energy fund focusing on renewables in sub-Saharan Africa. He also sits on the board of Globeleq (a Pan-African power company), and chairs Corbetti Geothermal Company in Ethiopia and Tanalec Zambia.

In September 2018, Mr. Njoroge was elected President of the 164- country International Organization for Standardization (ISO) with effect from January 2020. He is the first person from a developing country to hold this position in the ISO’s 72-year history.