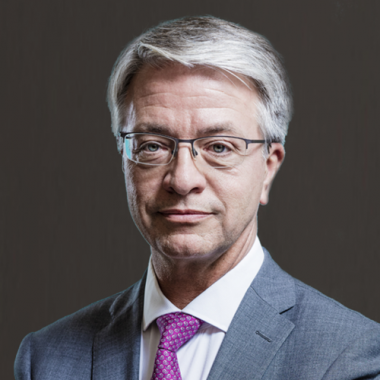 Jean-Laurent Bonnafé started off his career in France’s civil service as a senior officer in the Ministry of Industry, later being hired on as a technical advisor to the Minister of Foreign Trade. Bonnafé joined forces with BNP in 1993 as a senior investment banker. In 1997, he was appointed Head of Strategy and Development. Upon the 2000 merger of BNP and Paribas, he led the post-merger integration process.

In 2002, Bonnafé was appointed Head of Retail Banking for BNP Paribas in France, thereby becoming a member of the group’s executive committee. In 2006, the year of the BNL-BNP Paribas Group merger, he was chosen to act as BNL’s Managing Director. Two years later in 2008, he became BNP Paribas’ COO, assuming responsibility for the retail banking activities of the group as a whole.

Jean-Laurent Bonnafé held the CEO position at Fortis Bank from May 2009 until February 2011 to ensure the smooth integration of Fortis retail banking into the BNP fold.

Jean-Laurent Bonnafé is an engineer and a graduate of École Polytechnique and École des Mines.