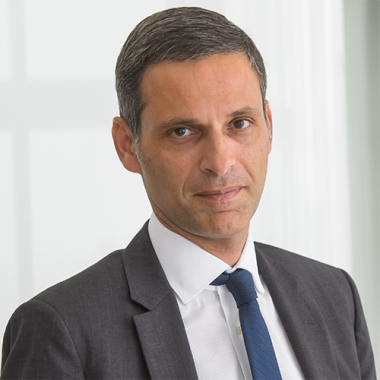 Born in Lebanon in 1970, Rodolphe Saadé has vast international experience. After a degree in Commerce and Marketing from Concordia University in Montreal, he founded a water cooler company before joining the CMA CGM Group, led by his father Jacques Saadé, in 1994.

Rodolphe primarily worked in New York and Hong Kong before moving to the head office in Marseille. From 1997 to 2000, he successfully headed different shipping lines before taking the Transatlantic and Transpacific lines under his responsibility. In 2004, he was appointed Executive Officer in charge of developing regular lines on the North/South axis. In 2006, he handled Delmas’ lines expansion in Africa and the Indian Ocean, turning the subsidiary into an efficient and profitable operator. Appointed Vice Chairman and member of the CMA CGM Group’s board of directors in 2010, he oversaw the financial restructuring of the Group in 2010.

In 2015, Rodolphe Saadé conducted the pre-conditional voluntary general cash offer for Neptune Orient Lines (NOL), a Singapore-based container shipping company, and became President of NOL’s board of directors in 2016. That same year, he conducted the talks that led to the signature of Ocean Alliance, a strategic and ambitious operational agreement with Cosco Shipping, Evergreen Line and OOCL, and became its Group’s Chairman and CEO in 2017.

In April 2019, in accordance with his strategy and following the successful CMA CGM Group’s public tender offer, Rodolphe Saadé became Chairman of the board of CEVA Logistics.