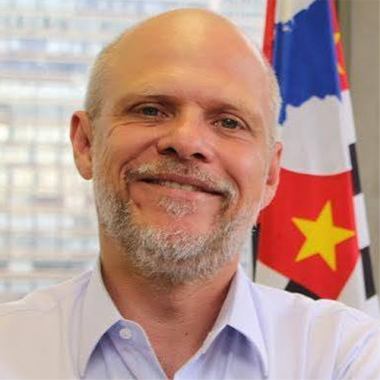 Sergio Avelleda is the Director of Urban Mobility at the WRI Ross Center for Sustainable Cities. Before joining WRI, Sergio was the Secretary of Mobility and Transport in São Paulo, Brazil, where he was responsible for managing traffic challenges and the most extensive bus system in the world. He led more than 5,000 people and spearheaded city implementation of Vision Zero programs to reduce traffic fatalities. Additionally, he was in charge of taxi regulation and transport mobile apps, as well as the management of the freight transport system.

Sergio was president of the São Paulo Metropolitan Company, which transports 4.5 million people daily on four subway lines. He changed how the company interacted with its users, incorporating SMS reporting and other programs, which were awarded by UITP. During his tenure, the company was constructing three new lines at the same time, and he led the negotiations with multilateral agencies. Prior to that, he was president of the São Paulo Metropolitan Trains Company (CPTM), a company with more than 8,000 employees and an annual revenue of $800 million. The CPTM serves 22 municipalities, providing transportation for 2.1 million passengers each day.

Sergio is a lawyer, and he received his MBA in 2012 at the Insper – Instituto de Ensino e Pesquisa in São Paulo. He is a cyclist and is passionate about connecting people in cities.