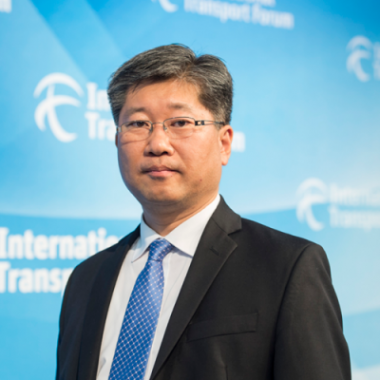 Young Tae Kim is the Secretary-General of the International Transport Forum (ITF). He was elected by the transport ministers of ITF member countries at their annual summit in June 2017 and took office in August 2017.

Prior to his election as ITF Secretary-General, Dr. Kim distinguished himself in the civil service of his native Korea, most recently serving as Director-General in the Ministry of Land, Infrastructure and Transport (MOLIT). As Deputy Director-General starting in 2015, he was responsible for coordinating various transport policies including those for autonomous vehicles, greenhouse gas reduction, urban transportation, intelligent transport systems and road safety, among others.

After joining the MOLIT in 1994 as Deputy Director for Urban Transport, Dr. Kim also held several Deputy Director and Director positions with responsibility for housing welfare, integrated city development and overseas infrastructure construction. He was seconded to the Prime Minister’s Commission on Administrative Reform in 1996 and the Presidential Committee on Social Inclusion in 2005-2007. From 2010 to 2014, Dr. Kim worked in Washington, D.C., as Counsellor for Construction, Transport and Maritime Affairs at the Korean Embassy.Dr. Kim earned master’s degrees in Public Policy from Seoul National University, Korea, and in Urban Studies from the Université de Vincennes à Saint-Denis in Paris. He also received his doctorate degree in Political Sociology and Public Policy from the Institut d’Etudes Politiques (Sciences-Po), also in Paris. Dr. Kim speaks fluent English, French and some Spanish, in addition to his native Korean.